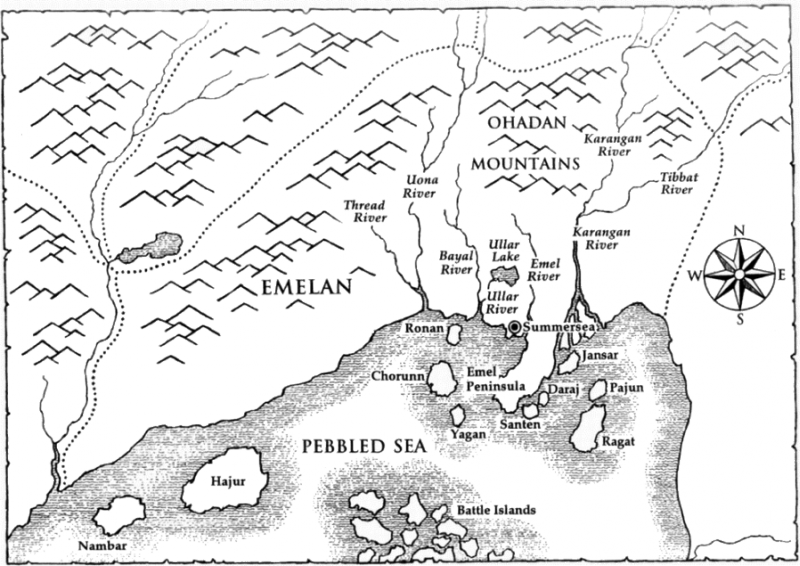 Lady Sandrilene fa Toren opened the door to her room and stepped into the dark corridor. She was dressed for riding in broad-legged breeches, tunic, and blouse, and in one hand she carried her riding boots. In the other she held a round blob of crystal threaded with dark lines. It shone brightly and steadily against the gloom. The hour was early enough that most of the servants were still abed, and the torches set to burn in the halls the night before had guttered out.

Holding up her stone to light the way, Sandry padded down the corridor in stockinged feet. It was because of the servants that she made so little noise. In six weeks' residence at the castle, she had learned that most of them were light sleepers. No amount of persuasion that she could look after herself quite nicely, thank you, was enough to send them back to bed. They would rise at dawn anyway—why cause them to lose as much as an hour of rest when they worked so hard?

As she passed a high table, she noted that the candle sticks atop it stood on a rumpled length of embroidered cloth. She reached out a hand. The cloth shifted until it lay flat and neat on the wood. A silk rug knocked askew slid in her wake until it lay straight again.

She plopped herself onto the top stair and tugged on her riding boots, then frowned. A light showed under the door of a ground-floor room that opened onto the entrance hall.

Uncle, she thought, vexed. And what odds that he hasn't been up since four? With a sigh, she trotted downstairs and entered the room, a small library. There sat her great-uncle in a wing-backed chair. He was reading a sheaf of papers by the light shed by a crystal globe. The globe was larger than Sandry's, perfectly round and with out flaws, its light as steady as the suns.

Inspecting his stark white shirt, black tunic, and breeches, Sandry decided she would have to do some thing about the duke's clothes. He liked to dress plainly, but there was no law that said he had to wear blacks, browns, and dark blues without any bright colors. A crimson tunic might warm his skin tone, and a touch of gold embroidery at his collar would add sparkle to his eyes. Until he was fully recovered from his recent heart attack, he would need such aids to keep his people from thinking he might still die.

And it wont hurt to stitch in signs for health and strength, either, she thought, fingers already itching to pick up needle and thread. "Uncle," she announced crisply, "just because the healers say you may ride again does not mean you are ready to take up your old work schedule as well."

Duke Vedris IV, ruler of Emelan, looked up at his favorite great-niece and smiled. The smile warmed a face that was still haggard, though he looked better to Sandry's critical eye than he had even a week ago. He needs to smile more, she thought. Without affection or amusement to light his eyes, he was a rather forbidding middle-aged man with fleshy features, deepset brown eyes, and an eagle's nose. With some warm feeling in his face, he looked both serious and kind, the sort of man it was easy to trust and depend on.

"This isn't work," the duke told her as he lifted the sheaf of parchments. "I'm just reviewing what's been done on the repairs to the harbor wall."

Sandry walked over to him, kissed his forehead, and drew the papers from his fingers. "The harbormaster is an expert on this sort of thing. You told me so yourself. And you know what Dedicate Comfrey said—why pay these people if you have to watch them all the time?"

"I'm not watching. I'm keeping myself up-to-date." The duke carefully got to his feet. Sandry did not try to help. Too many people did that, and it upset him far more than did the loss of his former strength. "You and Dedicate Comfrey should understand that sooner or later I must begin to oversee my realm once more."

"I can't wait until you do," she told him pertly. "You're getting awfully hard to handle."

He laughed at that. I'm going to miss you when you return to Winding Circle," he remarked, going to the door. "You're the only one who is completely frank with me.

As he left the: room, Sandry put the papers she had taken on, his desk. For a moment she stayed there, staring blindly at the curtained, windows. As much as she wanted to return home, she worried about him.. Over and over she had, heard tales of the way he lived, skipping meals and going without sleep to complete some piece of work, His household was in awe of Duke Vedris, and feared to balk him. Without her there to keep an, eye on things, he would probably return to his; old bad habits.

She didn't like that thought. Emelan's best healer-mages had warned her that while they had done all they could to strengthen his heart and veins, he was vulnerable to another attack, A second one might well kill him; a third definitely would.

He managed, without a meddling fourteen-year-old for years, one voice said in her mind.

He was younger then, argued a second.

Sandry growled with impatience—she had been, listening to this internal argument for weeks—and flung her hands wide. The heavy draperies on the windows flew apart to bare expensive glass panes. The thick gold ropes that held the curtains open wrapped around the lengths of cloth and tied themselves, then let their tasseled ends dangle neatly.

Getting her worries under control, Sandry followed her uncle to the main door. It was open already, offering a view of the stone courtyard, a score of burning torches, and a squad of the Duke's Guardsmen and their horses.

Duke Vedris waited for her to reach him and offered his arm. His dark eyes searched her face intently. "Did I say anything to distress you, my dear?" he asked quietly.

Sandry shook her head and made herself smile. "The only thing that distresses me is the thought that you got up early this morning to read papers," she informed him. "You're supposed to rest, Uncle!" As they walked down the stair to their mounts, she thought, And what will Lark say if I stay with him?

"Pasco. Pasco, wake up." He rolled over and moaned. A hand grabbed his shoulder. "Pasco, you chuff, getting up was your idea. Now do it—I want to go to bed." Pasco Acalon sat up, blinking. His sister Halmaedy knelt by the bed, her dark eyes amused. She was still dressed for the watch that had just ended, the brown leather of her jerkin stark against her dark blue shirt and breeches.

Pasco rubbed his face, ordering his traitorous body to move. " 'S a disgusting hour to be about," he grumbled.

Pasco swung his legs out from under the blanket and leaned against his oldest sister. Their long, amber- skinned faces labeled them as kin: the same winged black brows over ebony-colored, eyes, noses a little too short, and. straight mouths a little too wi de. At twelve Pasco was just starting to get his growth, his thin body coltish as he wrestled with arms and legs that tended to go every which way.

"A friend, wants a favor," the boy mumbled as he pulled on his garments, tying the string that held up his breeches as tight as he could manage. His shirt required no buttoning, which was why he'd picked it out last night. The less; he had to do before he was properly awake, the better.

"What: kind of favor?" Halmaedy demanded, suspi ious. "This isn't off the straight, is it? Because—,"

Pasco ruffled her hair—glossy black, cropped short on the sides and left to grow long on top, just like his. "You're home now," he reminded her. "No need for harrier work here." Harrier was; street slang for a Provost's Guard. "An Acalon off the straight?" he went on, his voice strangled as he bent over to don his shoes. "The very skies would cry at it. Go to bed, Halmy. Try to dream of something beside arresting drunks and house breakers."